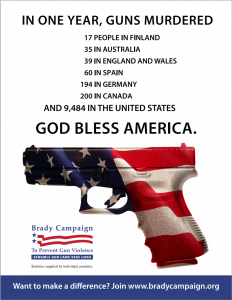 So many dead. So many children. I am numb . . . and I can’t wait to see my kids when I pick them up from school today. I’m also a gun owner. I am not, however, so numb I can’t recognize a need to address the issue of gun control. We treat these occurrences like we treat earthquakes; as if they’re natural disasters and, with the exception of securing loose objects and having some emergency supplies at the ready, there’s nothing we can do about ’em.

We seem to face a choice; either arm everyone – including the children – or come up with rational policies that keep guns out of the hands of those who have no business possessing them. I’m kind of thinking the latter would be easier, cheaper, and more humane . . . not to mention rational.

I didn’t do a comparison of the populations of all six other countries listed, but we can look at one – Canada. With these numbers (assuming them to be accurate) the U.S. population would have to be 47 times that of Canada. Actually, the population of the U.S.  is 9 times greater than that of Canada so, were all things reasonably equal, we could expect a gun murder rate of approximately 1800 people, less than 1/5 of what it actually is. That’s got to be pretty strong evidence of some kind of fundamental problem. Don’t you think?

Since my retirement from Pratt & Whitney Rocketdyne in 2010, I have spent quite a bit of energy on developing work as a social media marketer for small business, a business manager for an AI software development firm, and as an editor/proofreader for a number of business books and a couple of novels, as well as a two-year return engagement at Rocketdyne from 2015 to 2017. I have decided to stop actively pursuing business in these fields and am now positioning myself to be a writer. I have done quite a bit of writing over the years, but I’ve never really attempted to make any money at it; at least not specifically. I’m starting out with a couple of memoirs and, currently, I’m studying the craft, creating a detailed outline and timeline, and honing my skills as a storyteller. Pretty sure I’ll be writing some fiction as well. END_OF_DOCUMENT_TOKEN_TO_BE_REPLACED
This entry was posted on Friday, December 14th, 2012 at 12:05 pm and tagged with children, Columbine, Connecticut shooting, gun control, gun violence, guns, Schools, shooting, tragedy, weapons and posted in Family, Health, Personal, Philosophy, Politics, Random Thoughts. You can follow any responses to this entry through the RSS 2.0 feed.
« Steeerike threeee! Yer Out!
There Are No Ordinary People »