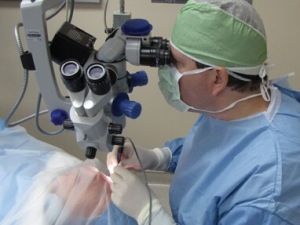 Today I am going to the ophthalmologist to begin the process of having cataract surgery. The thought of having my eyeball sliced open has always kind of creeped me out so, although I’ve known it was coming, I’ve put it off until I can no longer wait. The other day I was working with the team on a schedule, which was on the screen in a conference room. I had to sit at the back and use the screen to see what I was doing. I had difficulty reading some of the numbers (e.g. dates, durations, unique IDs, etc.) and it was very uncomfortable. Not being able to do my job to the best of my abilities is scary and uncomfortable.

If you want to know what it’s like, and you wear glasses, just take a little petroleum jelly and smear it on one of your lenses. You’ll still see reasonably well because your good eye will compensate to an extent. Depth perception won’t be affected at all. Unfortunately for me, my “good” eye isn’t all that good anymore either. I’m pretty sure a cataract is developing there as well and, to top it off, I’ve long had a small blind spot dead center in that eye. It’s seldom affected me in the past because my other eye (pre-cataract) has compensated well. Now they’re both going.

According to what I’ve read, the surgery is the most widely performed worldwide and is also extremely successful. I’ve talked to numerous people who have had the surgery or who know someone who’s had it and they all say it corrects their vision so well that many no longer require glasses. I’m not expecting that outcome, but it’s comforting to know the procedure is routine. One person told me he felt like he was on an assembly line when he had it done. I’m ready. Can’t wait to see the Moon, planets, and the stars again in all their glory.

Since my retirement from Pratt & Whitney Rocketdyne in 2010, I have spent quite a bit of energy on developing work as a social media marketer for small business, a business manager for an AI software development firm, and as an editor/proofreader for a number of business books and a couple of novels, as well as a two-year return engagement at Rocketdyne from 2015 to 2017. I have decided to stop actively pursuing business in these fields and am now positioning myself to be a writer. I have done quite a bit of writing over the years, but I’ve never really attempted to make any money at it; at least not specifically. I’m starting out with a couple of memoirs and, currently, I’m studying the craft, creating a detailed outline and timeline, and honing my skills as a storyteller. Pretty sure I’ll be writing some fiction as well. END_OF_DOCUMENT_TOKEN_TO_BE_REPLACED
This entry was posted on Monday, June 8th, 2015 at 8:42 am and posted in Professional. You can follow any responses to this entry through the RSS 2.0 feed.
« Mi Casa es Su Casa, Kinda
Was It Something I Said? »