Have you ever watched the International Space Station pass by in orbit? I don’t know about you, but there’s something majestic, even magical for me just watching it fly overhead. A bright object moving at nearly 5 miles a second appears very fast, even at a distance of hundreds of miles away, and it is awe-inspiring to look up and know there are humans aboard. Several years ago I remember seeing the Station, a Soyuz capsule, and the Space Shuttle all pass overhead as they moved toward a rendezvous and docking. During that mission there were something like a dozen people silently flying by far above my house.

Since my retirement from Rocketdyne, and the cancellation of the Shuttle program, my interest has drifted away some. After all, there’s nothing quite like watching a large, powerful vehicle’s engines roar to life and lift it off the pad into orbit in less than ten minutes. The Station is almost invisible by those standards. It’s already up there and it’s passage is almost mundane. There’s no smoke and fire. It’s swift, but it’s silent.

Recently, I decided to add an app to my phone so I could find out when the Station was flying overhead. Not sure why my interest returned, but it did. The app I chose is called ISS Spotter. It’s free and has everything I need to observe the station. Here are the three views I use the most, though there are settings and a help screen available as well. The first one shows the Stations position and direction of travel (along the thick yellow line) from above and against a map of Earth. It also shows (the blue dot) your location; in this case, near Los Angeles. It has a couple of other bits of functionality, but they’re not relevant to this post. 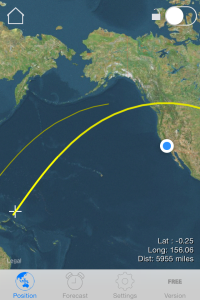 The second view shows upcoming passes over your location (which, btw, it determines automatically using your phone’s GPS, though you can also customize it on the setting page [not shown] if you know your coordinates [and you care]). I use the auto setting and it works just fine. It even adjusts if I’m somewhere else. There are other settings available for time prior to passage for alarms, minimum peak elevations, and others. There’s also a star rating to help you decide how much effort you may want to exert getting outside to view the pass. One star means a pass you might find meh, while three stars indicates even the Magi might be impressed. Note, the next one I’m planning on getting outside for has two stars. As you can see on this page, it will be at a visible altitude (at its highest) of 68° and will shine at a magnitude (visible on the third view, below) of -2.9. 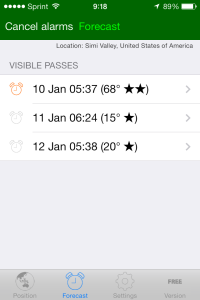 The third view provides everything you need to know to actually find the station, even if you don’t make it out when it first appears. You can also see here that this pass will last a total of six minutes and thirty-eight seconds. Plenty of time to freeze your ass off if you’re anywhere affected by the Polar Vortex, which I’m not. 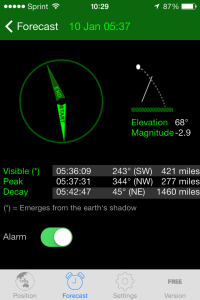 I had forgotten, but I got an alarm this morning just in time to go out around 0630 and watch it pass. There were two things that struck me as I stood out in the backyard. When I first spotted it, the Station was well out over the Pacific and, minutes later, it was well over Nevada as I went back inside. In the approximately three minutes I spent observing, that orbiting outpost of humanity and science traveled nearly a thousand miles. The other thing, and it happens every time I observe it silently passing by overhead, was I could swear I was able to make out her warp nacelles.

Since my retirement from Pratt & Whitney Rocketdyne in 2010, I have spent quite a bit of energy on developing work as a social media marketer for small business, a business manager for an AI software development firm, and as an editor/proofreader for a number of business books and a couple of novels, as well as a two-year return engagement at Rocketdyne from 2015 to 2017. I have decided to stop actively pursuing business in these fields and am now positioning myself to be a writer. I have done quite a bit of writing over the years, but I’ve never really attempted to make any money at it; at least not specifically. I’m starting out with a couple of memoirs and, currently, I’m studying the craft, creating a detailed outline and timeline, and honing my skills as a storyteller. Pretty sure I’ll be writing some fiction as well. END_OF_DOCUMENT_TOKEN_TO_BE_REPLACED
This entry was posted on Thursday, January 9th, 2014 at 11:39 am and tagged with app, cell phone, Earth, international, ISS, magnitude, map, orbit, Rocketdyne, Space Shuttle, space station, Warp Nacelles and posted in Entertainment, Info Tech, Personal, Science. You can follow any responses to this entry through the RSS 2.0 feed.
« Google Glass and ALS
First Post From Path – a Test »

2 responses to “Seen a Spaceship Lately?”