Helping to Create a Virtuous Cycle 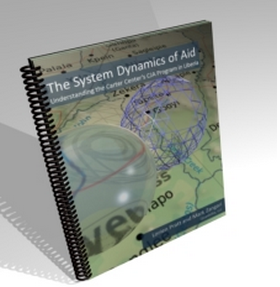 In a previous post I mentioned some work I had done for Quantellia involving the Carter Center’s efforts in Liberia to strengthen the country’s legal system. I have not been at liberty to discuss the effort until a couple of weeks ago, when Quantellia announced the work and their findings. Of their work, the Carter Center says:

Since 2006, building on its long history of engagement in Liberia, The Carter Center has been implementing an access to justice project in Liberia in response to these critical needs and invitations by the government.  Governed by a Memorandum of Understanding with the Ministry of Justice, and in partnership with the Ministry of Internal Affairs, the National Traditional Council, and other stakeholders, the Center works in four areas with the aim of helping to create a working and responsive justice system consistent with local needs and human rights, paying special attention to rural areas and the needs of marginalized populations. ¹

One of those four areas mentioned is “Improving Access to Justice”, and Quantellia was tasked with building a decision model showing the efficacy of sending Community Legal Advisers (CLA), now called Community Justice Advisers (CJA) out into remote, underserved communities by providing them training, support, and motorscooters. These CJA are paralegals and they are tasked with helping both plaintiffs and defendants gain access to the formal justice system which, in many locales, lags behind the people’s use of customary justice.

I want to share the results of that work here. I’m very pleased and proud with the role I was able to play in the final document. The agreement was that I would do research and write a first and second draft, at the least. Also part of the agreement was that I would not receive credit, which I was quite happy to accept. I am, therefore, grateful the authors saw fit to acknowledge my efforts in a footnote. It’s far more than I expected; a lagniappe.

Here’s a link to the World Modeler Blog, where you can read Quantellia’s announcement regarding the project. Although both the paper and the video are available there, I’m also including a link directly to the paper (here) and embedding the video below.

I have often said I thought I would find it hard to find something to do that would be as exciting and fulfilling as working on the manned spaceflight program — specifically the Space Shuttle Main Engine — which I did for over two decades before my (somewhat early) retirement. After all, working with many of the world’s best rocket scientists does have its perks (or perqs), especially intellectually, and being a part of humanity’s effort to venture out into space is something I feel borders on the sacred. Working on this project provided me with those feelings as well and was both challenging and fulfilling. The video and the paper are, in my opinion, very well done and beautifully presented. I am proud to have been a small part of it.

I am, of course, very supportive of Quantellia’s vision and the products and services they have to offer. In fact, in case I haven’t mentioned it elsewhere, I began an association with them as a referral partner at the beginning of this year. If you’re dealing with complexity and would like to hear how we can help you realize your goals more effectively, drop me a line. I’m easy to find.

Born in 1947, I am an officially retired pensioner who still has two teenage daughters and a desire to contribute. I remain intensely interested in, and fascinated by, Systems Thinking, Machine Learning, Knowledge Management, Decision Intelligence, and Business in general. I am also conversant in such concepts as innovation and ideation, collaborative tools and strategies, crowdsourcing, and the use of social media to accomplish goals ranging from improving business processes to promoting small retail businesses. Since my "retirement" I have done a little bit of freelancing as an editor/proofreader, as well as some technical writing. I've also done a fair amount of Facebook marketing as well. There's lots more where that came from. Need some help? Perhaps another set of eyes? Contact me. The first one's free! ;0) END_OF_DOCUMENT_TOKEN_TO_BE_REPLACED
This entry was posted on Tuesday, February 11th, 2014 at 12:45 pm and tagged with Accessibility, CJA, Decision Modeling, decision science, Human Rights, justice, Lagniappe, Law, Liberia, Quantellia, Stability, The Carter Center, World Modeler and posted in Professional. You can follow any responses to this entry through the RSS 2.0 feed.
« World Modeler Has Me Rethinking Trade Studies
Why crowdsourcing works »

One response to “Helping to Create a Virtuous Cycle”