We’re on our way to San Diego, aboard Train 768, from the Simi Valley Amtrak station a few minutes from our house. After a half hour layover at Union Station in Downtown LA, Fullerton is our next stop. I chose this method of travel thinking it would be a bit of a different experience for the girls. Also, the commute in a car is not one of my favorites. Frankly, driving is not one of my passions, even though I’ve done a lot of it.

It’s the end of Spring break for the girls and I’ve been squirreling away money so we could do something before it’s too late. Our oldest will be 15 in less than three months and she already inhabits a different universe than Linda and I do, and this may be the last time we’ll be able to enjoy a couple of days together for many years.

After we get to San Diego we’re going to head to the hotel and see if we can check in early. If we can’t, we’ll check our bags in, head to lunch, and then to the USS Midway Maritime Museum.

Tomorrow is reserved for the zoo. Our younger daughter really, really, really wanted to go to the zoo, so she’s very excited. I already purchased our tickets online, though I printed them out, as I wasn’t convinced they would accept the .pdf they sent and I saved to Evernote. The Midway has an app and our tickets are available in it. Amtrak scans everything (as does just about everyone, I suppose) and I just confirmed with the Conductor the .pdf they sent would be just fine off of my phone. I’ll do that on our return.

The trip is a bit longer than if we had driven but, unless you’re Agoraphobic, it’s far less stressful. I am, after all, writing this as we now head toward Irvine. We’re headed almost due south and will soon be skirting the Pacific Ocean. So far, the urban scenery has been pretty grim. I’m looking forward to seeing some open, less sullied space. I need to give a shoutout to Google Maps, and GPS technology in general, as I no longer have to guess where we are. For someone with a slight bent toward orienteering, it’s a bonus.

There’s a bunch of guys who, apparently, are on their way to a bachelor party, a fact I just learned after this rather loquacious woman got on and immediately started a boisterous conversation with them. I can barely hear them, but I’m sure most of the car can hear her, and her male companion who chimes in now and again. Unfortunately, Aimee (our oldest) has her ear buds nestled tightly in her music saturated skull and is missing the show. This was one of the reasons I thought the train would be interesting for the girls. Dang!

Just pulled into San Juan Capistrano; not a swallow in sight but, the Pacific is nigh. Surf’s only a couple feet and it’s a bit choppy, but there are some stalwarts out apaddlin’. 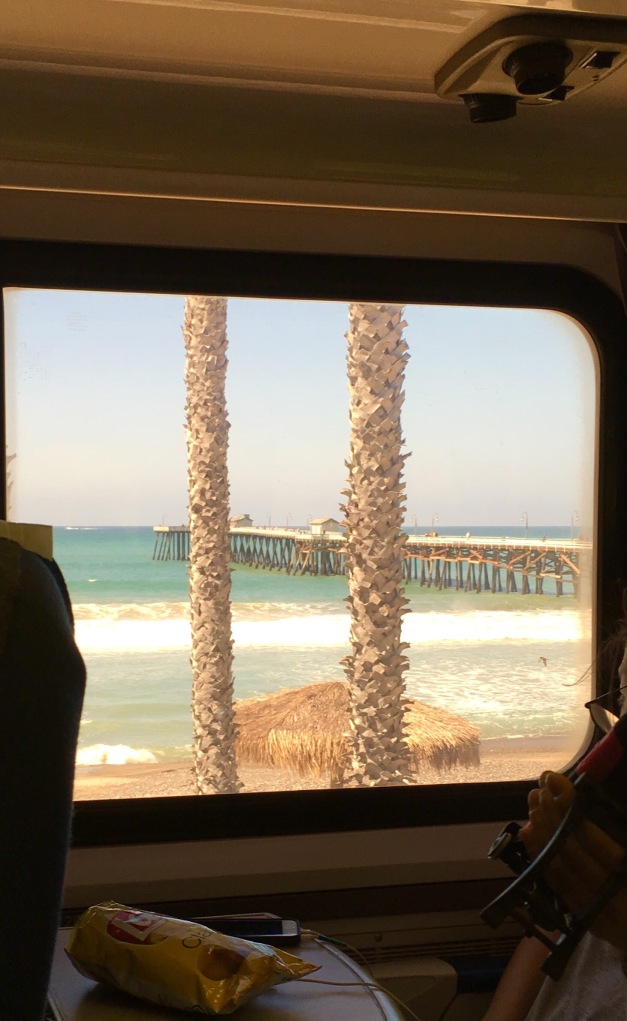 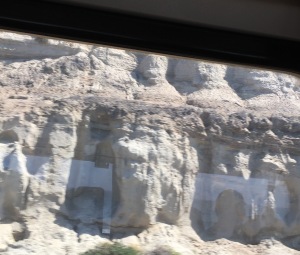 The edge of the continent, slowly eroding

San Onofre which, thankfully, has yet to melt down

We’ll be there soon and I have a family to attend to. So far, so good. There’s a bit of a party atmosphere aboard this train. Looking forward to exploring the Midway. Now I have to decide whether or not to punk the girls for April Fools. 😀

Born in 1947, I am an officially retired pensioner who still has two teenage daughters and a desire to contribute. I remain intensely interested in, and fascinated by, Systems Thinking, Machine Learning, Knowledge Management, Decision Intelligence, and Business in general. I am also conversant in such concepts as innovation and ideation, collaborative tools and strategies, crowdsourcing, and the use of social media to accomplish goals ranging from improving business processes to promoting small retail businesses. Since my "retirement" I have done a little bit of freelancing as an editor/proofreader, as well as some technical writing. I've also done a fair amount of Facebook marketing as well. There's lots more where that came from. Need some help? Perhaps another set of eyes? Contact me. The first one's free! ;0) END_OF_DOCUMENT_TOKEN_TO_BE_REPLACED
This entry was posted on Friday, April 1st, 2016 at 11:42 am and tagged with Amtrak, family, holiday, San Diego, train, trains, travel, USS Midway, vacation, vacay, Zoo and posted in Entertainment, Family, Professional. You can follow any responses to this entry through the RSS 2.0 feed.
« A Day With Edward Tufte
Beautiful Downtown San Diego »

One response to “Our Spring Break Denouement”