What Is Romney’s Campaign Thinking? 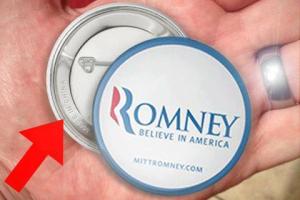 Don’t these people vet anything?

I am now fully aware this picture is not real. Please see my apology and explanation here.

I wasn’t quite sure I wanted to blog about politics, but it seems I just can’t keep my mind off the election. It’s easy to say, as I probably have many times before, this is the most important election of my life. I’m not sure it’s true. There is nothing, in my opinion, Romney and Ryan can do that will stop the inevitable. The arc of history has always bent toward the increasing prevalence of peace, justice, and freedom – even if it doesn’t seem that way in various parts of the world.

Much like the existence of cooler temperatures in one small area of the planet does not prove global warming isn’t occurring, you can’t generalize from regional strife and even setbacks like our current economic conditions that our society is devolving. I have said more than once I almost thought it would be good for Michelle Bachmann to become our President because it would surely bring about the next – quite likely necessary – American revolution. I say “almost” because I really would prefer we evolve peacefully. Violence doesn’t generally do much for the species, although it may temporarily benefit one group over another.

Now . . . having said that, let me offer that this probably is the most important election of my life :). We have just barely come through the worst economic collapse in several generations and we’re not out of the woods yet. In my opinion the Policies espoused by the Romney-Ryan ticket are destined to turn the United States of America into what Arianna Huffington has referred to as Third World America. As Bill Clinton said the other night, in his speech to the Democratic National Convention, the Republican position is “we left him a total mess, he hasn’t cleaned it up fast enough, so fire him and put us back in.” I’m pretty sure that’s not a good idea. I will have more to say about this in the next couple of months. There’s plenty of material out there. I just need to move it from Facebook to here.

At any rate, this graphic is both sad and hilarious. I keep saying that the Republican Party leadership projects all of their worst traits onto others. To me, this is a perfect example of it. One can reasonably assume, if it actually crossed their mind it was important, they would have been willing to spend a little more money getting their buttons made here in the USA. That they don’t care seems pretty evident. Where the projecting comes in is I’m reasonably certain they think we don’t care either and won’t be paying any attention? Am I crazy? What’s your interpretation of why this would happen?

PS – If it’s unclear in the picture I snatched from my Facebook news feed, the arrow is pointing to the words, “Made in China” . . . but you knew that, right?