On Being a Softie 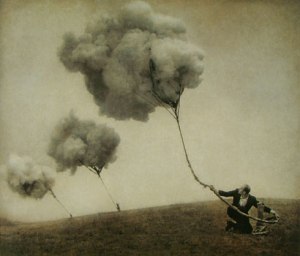 To Open Up And Believe

The willing suspension of disbelief. What a powerful, magical, and exceedingly frightening thing it can be – at least for me. Not always, though. It’s been quite a while since my last venture into the genre but, a long time ago – in a galaxy far, far away – I read a lot of Science Fiction. Reading it can’t possibly be enjoyable if you aren’t able to suspend your ability to think critically. Nevertheless, I enjoyed the hell out of what many an author hated being called Sci-Fi.

I’m normally somewhat cynical and am a fairly skeptical person, so I’m continuously surprised at how easily I can get sucked into a compelling story, especially if the characters are even moderately complex. I think it actually frightens me to realize how deeply I have disappeared into many a television drama.

This tendency has no doubt been exacerbated by my becoming a father at the ripe old age of 55, when my wife and I culminated a decision we had made a couple of years earlier and traveled to the People’s Republic of China to adopt our first child. We repeated the process four years later and, at the tender age of 59, I once again became a new father.

I now find myself immersed in shows where children are involved (it happens far more often than one might think) and I can’t help but identify with the parents, which sometimes brings me to tears – occasionally racking sobs of grief.

It has always been this way. I’ve been told the men in my family – many of them – were blubberers. Though I couldn’t have been older than five or six at the time, I recall the first time I saw my father cry. He had just received news that my Bubbie Jennie, his mother, had died. He hadn’t seen much of her since moving to Southern California. She had remained in Chicago, where both my parents were born. It was eerie, and not a little unsettling to see my father, a young boy’s tower of strength and resolve, break down like that.

It was made more difficult because I had only met her once, when she came to visit for a week, and she was unfamiliar to me. On the other hand, my maternal grandparents lived with us and I felt a strong emotional tie to them I could not summon up for her. She was by Bubbie, though. My mother’s mother was just Grandma.

I frequently ask myself, however, why I am so deeply and painfully drawn into these stories. I’m not entirely certain I have the answer, but I’m pretty sure it’s not so much the story itself as it is the relationship those stories bear to my own life.

Dictionary.com defines empathy as follows: the intellectual identification with or vicarious experiencing of the feelings, thoughts, or attitudes of another. That seems pretty straight-forward, yes? I am a fairly empathetic person and I tend toward the second part of that definition, i.e. I feel the pain of others vicariously. However, I don’t think this captures the essence of what is happening when I am fully immersed in a story.

Perhaps it’s too fine a point and the distinction isn’t all that great, but it seems to me what’s really happening is I’m overlaying the experience in the story onto my own life. I’m not so much experiencing the feelings of another as I’m experiencing the feelings I would have were I to be in that situation. I don’t think they’re the same. Then again, maybe that’s the mechanism that actually facilitates empathy.

This is a minor conundrum that comes to me most every time it happens and, usually, I forget about it within a minute or two. Lately I decided to try and get a descriptive handle on it and this is my first attempt.

Empathy is a valuable and deeply human trait. It is one of the five traits listed as characteristic of emotional intelligence which, in turn, is seen by many as a valuable business and leadership skill. It’s important to understand and to cultivate in order that we may better understand the people in our lives, whether at work, play, or home.

I want to understand what is moving me when this happens. On some levels it seems patently ridiculous to get so emotionally involved in a fiction story. On the other hand, perhaps it is really what makes us human. I’m wondering if someone with a more classical education than I have knows more of the thinking humans have brought to the subject. I’m sure some in the Arts (especially the Theater Arts) have tackled it. I’ll have to do more research. In the meantime, I’m glad there’s plenty of tissue in the house.

Born in 1947, I am an officially retired pensioner who still has two teenage daughters and a desire to contribute. I remain intensely interested in, and fascinated by, Systems Thinking, Machine Learning, Knowledge Management, Decision Intelligence, and Business in general. I am also conversant in such concepts as innovation and ideation, collaborative tools and strategies, crowdsourcing, and the use of social media to accomplish goals ranging from improving business processes to promoting small retail businesses. Since my "retirement" I have done a little bit of freelancing as an editor/proofreader, as well as some technical writing. I've also done a fair amount of Facebook marketing as well. There's lots more where that came from. Need some help? Perhaps another set of eyes? Contact me. The first one's free! ;0) END_OF_DOCUMENT_TOKEN_TO_BE_REPLACED
This entry was posted on Tuesday, September 25th, 2012 at 3:28 pm and tagged with adoption, Art, Arts, blubbering, Bubbie, drama, emotional intelligence, empathy, grief, Sci-Fi, Science Fiction, story, suspension of disbelief, tears, Theater, Theatre and posted in Business, Leadership, Personal, Philosophy, Professional, Random Thoughts. You can follow any responses to this entry through the RSS 2.0 feed.
« Rocketdyne Gets Snubbed Again!
More Softiness! »

One response to “On Being a Softie”