When The World Almost Ended 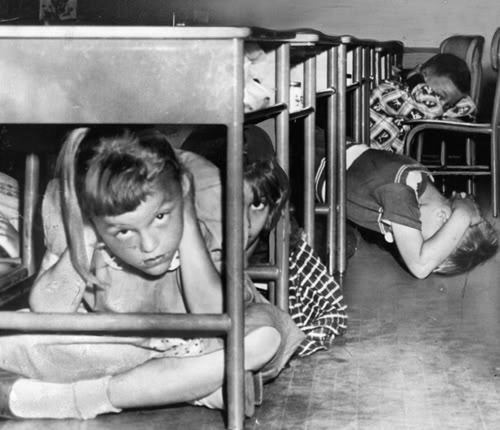 The Cuban Missile Crisis came up in a short conversation I had with my 14-year-old daughter yesterday. She knew little about it but was somewhat aware of the Cold War.

The conversation, however, reminded me of several things that haven’t crossed my mind in a while. The first memory was of walking to a Dale’s supermarket in Panorama City, California where I lived in the 50s and where one of my best friends continued to live.

I was 15 and he had turned 16 that year, so we may have driven, though I doubt it. What I do remember is the empty shelves, most all of the food having been scooped up by people expecting the end of the world. It was eerie.

The other thing that popped into my mind was the frequent drop drills, which I suspect is similar to how kids today are trained to react in case of an earthquake. In retrospect, I find it amusing we were taught that crawling under our desks could protect us from a thermonuclear detonation nearby. Back then, there were lots of targets nearby, not the least of which was Rocketdyne, where I have worked most of the last three decades.

Finally, I had long forgotten the monthly air raid siren drills. Once a month – as I recall, it was on the third Thursday – at 10:00 am, the sirens would blast for about a minute. Not sure when it ended, but it had to be a long time ago. At this point I’m pretty sure most of my friends have no recollection of these drills, as they never experienced them.