The need to address the SARS-CoV-2 pandemic may have done more to accelerate the digital transformation many have been working towards for years, than all of the bitching, moaning, hand-wringing, and pearl clutching heretofore expended on cajoling knowledge workers to adopt and adapt these technologies.

Five years ago I served as the developmental editor on the 2nd edition of “The New Social Learning.” I had the pleasure of working with the co-author of the 1st edition, who was the principal author of the 2nd, Marcia Conner. Marcia is one of a handful of people who recognized the need for, and the power of, such a transition . . . and this book was an attempt to help leaders and organizations move forward to adopt these new ways of working, and working together.

I recommend this book highly for everyone who is now finding themselves either working at home or dealing with today’s need to be more “distanced” from our colleagues. There’s a wealth of good info here. I urge you to check it out. It’s about far more than just learning.

“The Workplace Has Changed. At this moment, your people are already learning through social media. They’re reaching out and connecting in powerful ways. The question is, can you recognize, appreciate, and take advantage of the power inherent in this new level of communication? Do you want to facilitate or debilitate? Do you want to play a part in what and how people learn? Or do you want to try to stop them? Will you restrict them? Or will you free them to do the work they were hired to do—and will you do it with them?”

Why Can’t You Learn, Old Dog?

I am both amazed and highly disappointed at the number of people who believe the ability of colleagues to talk to each other via a tool that is either fairly ephemeral and basic (e.g. MS Communicator) or more persistent and inclusive (e.g. MS Yammer or Cisco Jabber) is a waste of their time. One of my least favorite things to hear is “I’m too busy to learn how to do that” or “I don’t have the time to waste on these things.” 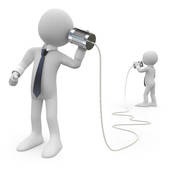 How can I help you?

“These things” are designed to improve our ability to share what we know and to find out what others know; not as a lark or just because, but in support of the work we do every day. How often have you remembered there’s some information that’s available to help you out, but you can’t quite recall where you last saw it or who told you about it? Imagine being able to essentially broadcast a question and have it reach dozens or more people, any one of whom might be able to answer the question for you. How is that a waste and in what way is spending 10 or 15 minutes to learn how to use a tool wasteful given how much time it can save in the long run? Even if you only saved 5 minutes per month, you’d be in the black after only a third of a year.

The business world is changing; grudgingly – at least in many places – but nevertheless changing. A long time ago one of my colleagues who had been a student of Deming’s and who was deeply involved in the understanding of systems, offered his belief that the main reason we survived as a company wasn’t so much because of how good we were at what we do. Rather, it was in large part due to the reality that everyone else was much worse. He wasn’t talking about our organization’s technical skills, but rather about our systems and procedures, most all of which exude bureaucracy from every corner.

I believed him then, and I’ve seen nothing to dissuade me from believing it still – even after a nearly five year hiatus and having been back for over six months now. I’m not sure how much longer any organization can continue doing business the way they’ve always done. I can’t possibly predict when it will be too late to change; when another business will match our technical skills and outperform our organizational skills, leaving us – eventually – in the dust.

It will undoubtedly take longer in aerospace than it would in, say consumer electronics, but even with long-term contracts and government funding there has to come a time when failure to learn and modify how things get done, especially those things that rely on people talking to and working with one another, will mark the end of an organization’s viability. I don’t dwell on it, but I do find myself occasionally listening for that other shoe to drop. You?