In addition to the newsletters I’ve published over the years, I’ve also done some promotional work for various businesses and reasons. This was a flyer I put together for a fundraiser at Simi Hills Golf Course, where I learned to play at 46-years-old. This means I’ve been playing golf for 26 years, which I have a hard time believing. Of course, when I became a first-time, adoptive father at 55, it definitely put a cramp in my style and I’m only now reaching a point where I think I might have time to play and practice a bit more frequently. Not sure I’ll be able to afford it, though.

At the end of 2005, I was still five years away from accepting an early severance package from Pratt & Whitney Rocketdyne and then retiring a couple years early. I don’t think the Shuttle program had yet been cancelled, so everything appeared to be full steam ahead. I had been deeply involved in developing the concept of Knowledge Management (KM), primarily to the Space Shuttle Main Engine (SSME) team—for which I was the lead—as well as for the entire organization, from its ownership by Boeing to a subsequent purchase and merger with United Technologies’ Pratt & Whitney Division.

So, there were two teams I was involved with: the corporate, enterprise-wide team, and the SSME team. I had convinced my management to start the SSME team before I knew there was a corporate team, and it was my primary focus of attention at the time. Starting in December of 2005, I published a newsletter for the team; a KM newsletter, ostensibly by the SSME KM team for the entire SSME program team.

When I returned to work for a couple of years at Rocketdyne in 2015, I was able to find pdf files of every issue of that newsletter, which we called “quicKMemos.” I’m am converting these pdf files into png files so I can upload them here. I’ll post them somewhat sporadically, no doubt, as I have several duties and obligations that are always tugging at my sleeve and demanding my attention. So . . . here’s the first one; Vol. 1 No. 1, December 2005.

NB – Check out the Eleven Deadly Sins of KM. They still seem relevant to me, though it’s hard for me to tell as it’s been nearly 10 years since I’ve been in a large enterprise environment.

Did Someone Say Newsletter?

I suppose you could say newsletters are in my blood. My father was the radioman aboard the USS William H. Webb during the second World War and one of his duties was to publish a newsletter for the crew. I remember looking through and reading his saved copies of each edition as I was growing up. I may even have some of them in a box in the garage somewhere, though I doubt they have held up all that well. They were printed on some pretty flimsy paper to begin with. I don’t think archival was part of their thought process.

Over the years I’ve done my share of newsletters, ranging from merely creating a SoCal edition of The War Bulleting, a publication out of Berkeley, California, that documented what was happening in Vietnam and Southeast Asia and the activities we were engaging in to protest our nation’s involvement, to a newsletter I created for my local golf course that garnered me lots of free range balls and rounds on the course, sometimes with a pro who couldn’t help but give me some instruction during the course of a round.

So . . . a series of events have convinced me it’s time to go through all my papers—and I have a ton of ’em—and organize, scan, and recycle as many of them as I can, memorializing what I find here on my blog. I also intend on gathering some of it into book form and see if anyone cares to read it.

Here’s the only saved edition I have of a newsletter I put together for the Student Bar Association of the University of San Fernando Valley College of Law. I’m a bit miffed to discover I didn’t put a date on the damned thing, so I can’t be sure if I published it in 1974 or 1975. Now that I think about it, I believe I was the 2nd year, full-time representative to the Student Bar, so that would have been ’75 . . . a mere 44 years ago.

Note the simplicity. There was no computer involved in any aspect of this publication, as PCs did not exist at the time. I’m pretty sure the headlines were stick-on letters I had to apply one at a time, and the copy was all done on a typewriter, though it may have been an IBM Correcting Selectric, because I was working as a secretary/clerk in a small law office in Beverly Hills at the time.

I’m surprised the paper held up as well as it has over all these years. It’s yellowed a bit, but it was still reasonably malleable; not brittle and parchment-like, as I suspect my father’s newsletter would be if I could find them. Then again, they’d be around 75 years old now.

I have also found a bunch of newsletters I created for Rocketdyne, as well as menus and promotional items I designed over the years, when I wasn’t working at Rocketdyne. I’ve also found some strange things I created as jokes during my tenure at what we called “The Rock.” I intend on sharing all of them.

12 Things You Should Know About Lists

I’ve received plenty of advice or, more precisely, offers to subscribe to newsletters, attend webinars, or purchase books on how to get more traffic to one’s blog. I’ve never been all that interested in them though, truth to tell, I sometimes read a few paragraphs or so. One of the great “formulas” for blog writing is “The List” which, for some odd reason, amuses the hell out of me.

Lists are ubiquitous and endless. Virtually anything you can think of has been – or can be – reduced to a list and chances are someone has created one. In that spirit, today I did a little poking around to confirm my suspicions. For your dining pleasure I bring you 12 lists of 12 things you should know about something or another.

I got these from searching Google for the phrase “12 things you should know about”, which returned a little less than 50 pages of reasonably relevant material. Some of the results were for different size lists. Five, ten, and seven are pretty popular size lists as well, each one returning around 40 pages, though the time-honored dozen provided the largest return.

I don’t know what this means or what it says about us (writers and readers). I’m not really big on formulaic writing, though I’ve recently done quite a few case studies, which must follow a basic format in order for them to make sense. Still, there’s something about the ubiquity of lists that grates on me a bit. Maybe my next post should be “13 Reasons I Can’t Stand Lists.” 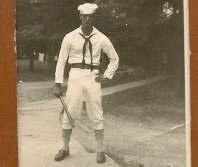 My dad during training, circa 1943

My last post was about how Facebook has made it easier for me to remember birthdays and, because of that, send my salutations and good wishes to people I respect and care for. It was meant to be a little bit light-hearted, but not too much. Recently, I’ve had occasion to think about another element of my personal life Facebook has enhanced. For Memorial Day this year I replaced my profile picture with one of my long-deceased father. It was taken at Great Lakes United States Naval Training Center, sometime during his training as a Radioman. Subsequently, he served aboard Liberty ships and LSTs (Tank Landing Ships) and was a participant in at least one of the notorious Murmansk runs. As somewhat of a side note, as a result of researching links to include in this paragraph I discovered that my father was likely in what is referred to as the U.S. Navy Armed Guard, a special group of sailors tasked with defending U.S. and allied merchant ships during WWII.

He never talked about his experiences in much detail, but I know first-hand he never again slept all that well. I learned at a very early age not to be within striking distance if I was asked by my mother to wake him up! I would gingerly grab a foot, shake a bit, then quickly back toward the door. I do know he also acted as somewhat of a ship’s journalist and cartoonist, as he had saved copies of the newsletters he wrote and published. I also know he was quite familiar with Morse code.

So, back to the point of this post. As a result of my putting the picture up (I’ve put it here as well), my niece – my brother’s youngest daughter – saw and commented on the picture and the few words I posted about why I put it up. She commented “Very cool Ricky…I knew he was involved somehow with World War II but I never knew specifics. Thanks for sharing :)”, to which I responded mentioning how I was glad I could share what I remembered before I’m gone as well. She then said “I agree! It is a shame that I never got to meet him, but I always love hearing stories about him, no matter that they are second hand :)”.

It then occurred to me that, despite the problems we’ve all had with Facebook, especially around issues of privacy, I have never connected with my family as completely as I’m able to do through it. I have managed to scan old photos of relatives and share them with my family. Many of them had never seen, and never would have seen, any of them save for my placing them on my wall. I know there are other ways in which I could share and, believe me, I’ve tried many. However, nowhere does such a large group of my family spend time than on Facebook.

I don’t wish to defend anything untoward that Facebook does, and I have no doubt they’ve overreached in some areas. I can’t image serving a customer base of some 3/4 of a billion users without something being amiss now and again, so don’t color me surprised or even terribly offended. I am also not interested in getting into a discussion of how you or someone you know has been wronged by the service or any of their numerous applications. I believe there are more useful forums for that kind of a conversation.

I merely wish to point out the slightly unappreciated capability Facebook has given me (just me, that’s it) to connect with family and friends that I otherwise would likely not have. As social media expands and becomes more useful and sophisticated, I have no doubt there will be rough spots and mistakes (possibly some very big ones) will be made. But, to use an old adage, I don’t wish to throw the baby out with the bathwater. I still like what I’m getting out of the offering . . . and the price is right in my wheelhouse 🙂